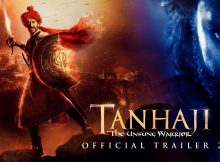 Bollywood News
Two successful editions are already held and this is the third edition of the Filmfare Short Films Awards. The Filmfare has announced the 34 films which have made
Read More